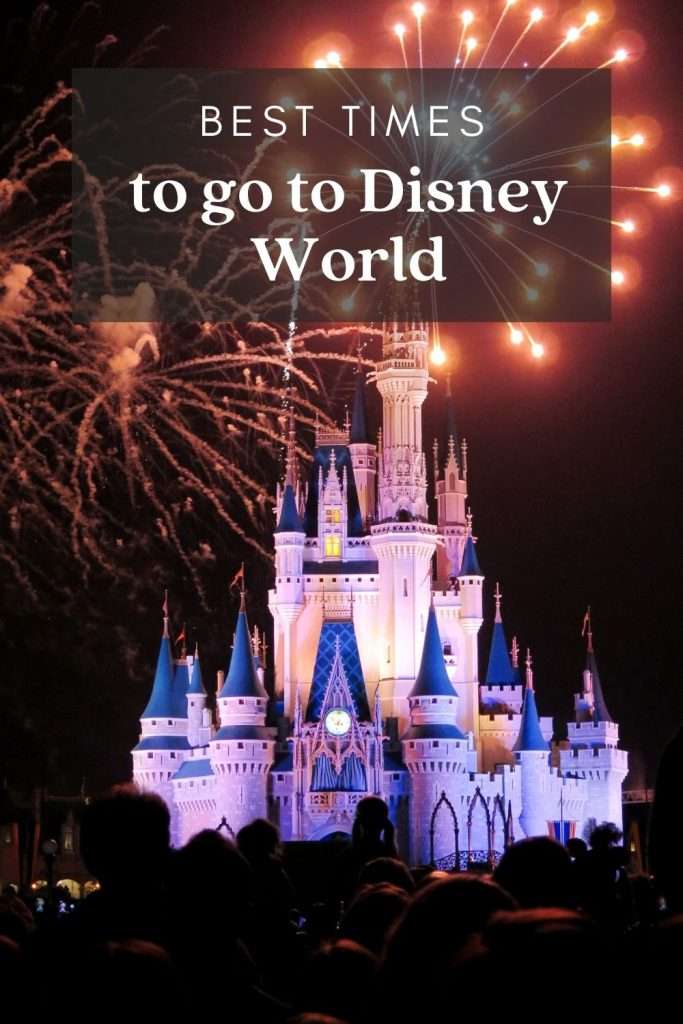 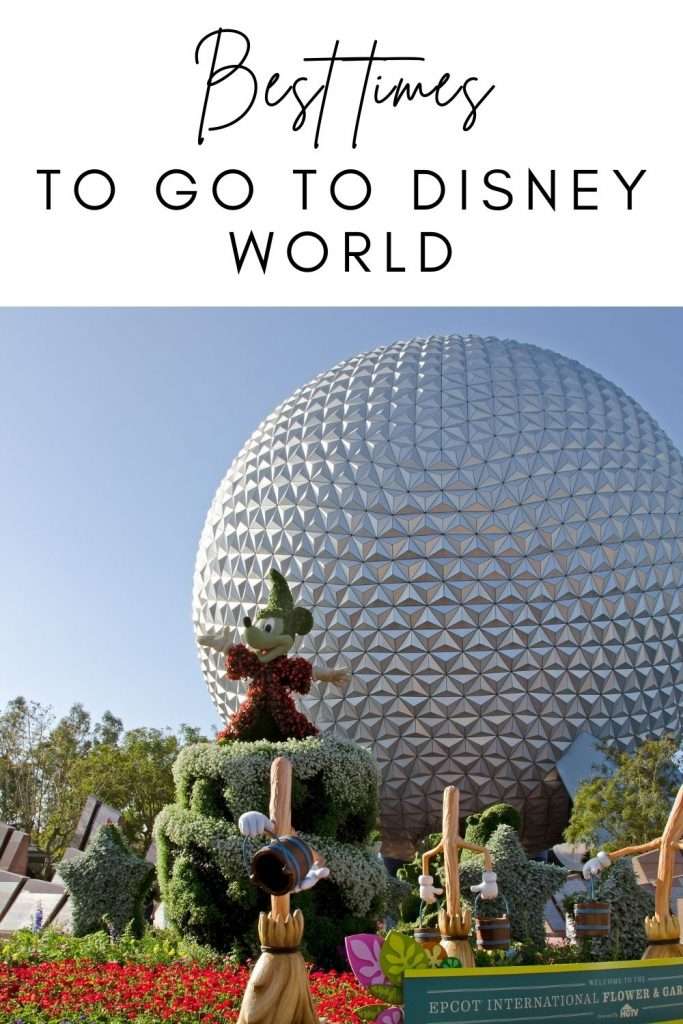 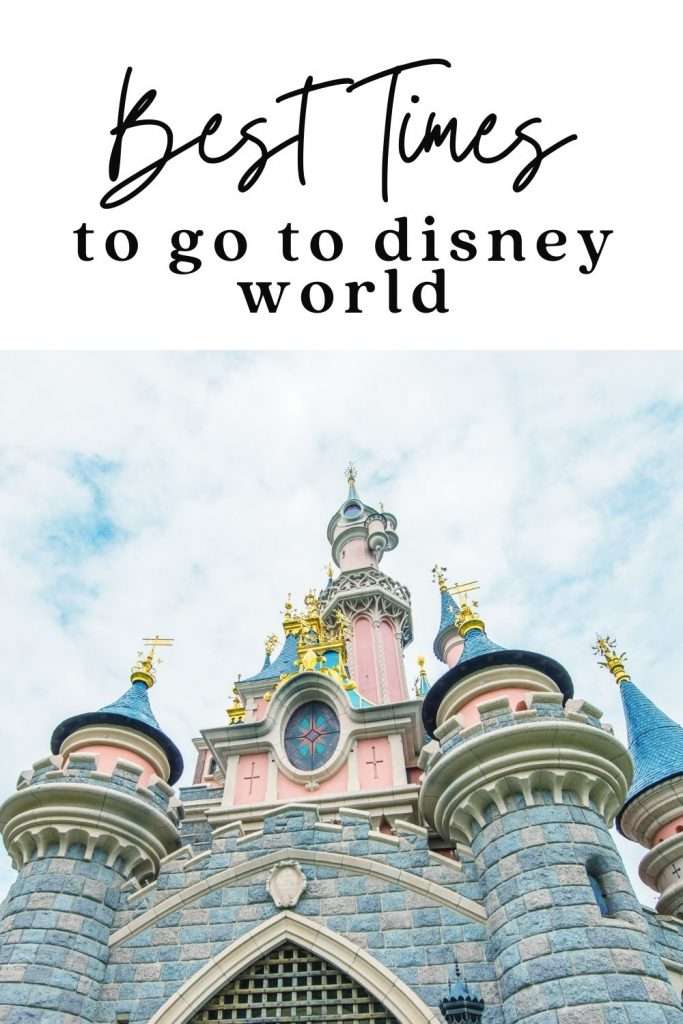 Are you thinking about planning a trip to visit Disney World? You may be wondering When Are the Best Times to Go To Disney World?

With crowds, weather, and prices all playing a role in your decision, it can be tough to narrow down the perfect time to take your vacation.

Here are a few important tips that can help you determine the best time for YOUR family to go on a Disney World vacation.

When Are the Best Times to Go To Disney World?

Consider the Crowds: One of the biggest factors that will influence your decision of when to visit Disney World is the crowd levels. Peak season at Disney World typically runs from mid-December through early January, and again from late May through early September.

These are the times of the year when school is out of session and families are most likely to travel. If you’re looking to avoid the crowds, you’ll want to visit during the “off-season.”

The Disney World crowd calendar is a great tool to help you determine which time of year will have the lowest crowds.

While Disney World is a popular vacation destination during the summer months, it’s also sweltering and extremely crowded.

Most families don’t want to vacation in the Disney Parks when it’s miserably crowded or hot. Being packed into a ride queue with a bunch of cranky, sweaty people is less than magical.

While Disney World has many fantastic attractions that normally will leave everyone feeling excited and ready to go on a magical adventure, it’s harder to enjoy the things around you when you get stuck waiting in long lines and dealing with massive crowds.

Watch The Video to Learn The Best Times to Go to Disney:

When is Peak Season at Disney World?

Knowing that June, July, and August are crowded at WDW, what is the best way to avoid that problem? First, avoid the peak season when most kids are on summer vacation.

Visit Disney World during November and early December. In most cases, children get time off from school for the holiday season. But, even if they don’t, it’s usually worth it to let them miss a few days of school.

Taking a few days off from school means making incredible memories with loved ones while in such a fantastic place like Disney World. You’ll never regret the time you take to celebrate and be together.

Other ‘non-peak’ times worth checking out are January, February, and early March. These months are not only easier to navigate because of the lower crowds, but they have some pretty great festivals designed to entertain guests at EPCOT.

There are even opportunities to learn about music, art, and flowers making you feel a bit less guilty about pulling the kids from school.

Pro Tip: By checking crowd calendars and event calendars, you can typically see when there are large events happening at Disney World. I always recommend avoiding these times, if you can.

The Holidays at Disney World

Although November and December are two great months for planning a trip to Disney World, you’ll need to be wise when selecting the dates. It’s in your best interest to check the calendar to see what date the actual holidays fall on for the year.

I would avoid the weekends before and after those holidays as well as the actual holidays themselves to make the most out of your park time.

The first two weeks in December are typically slow and a great time to visit and soak in all of the gorgeous holiday décor and yummy treats. If you can plan a trip for these weeks, you won’t be disappointed!

How crowded is Disney World during the Holidays?

Many families have the same idea of traveling to Disney World during the short Thanksgiving break to have some fun in Disney World. While it seems like the perfect time to visit, especially since it’s not too cold outside, it’s best to avoid Thanksgiving at Disney unless you are prepared to deal with large crowds and long wait times.

You can even usually enjoy spending time at Disney World a week before Christmas with smaller crowds than the actual holiday week.

Least Crowded Times During the Holidays at Disney World

The week before and after the Christmas holiday is still a popular time to travel with people heading to the area with their loved ones. However, it’s less likely to be too crowded during this time of year.

With smaller crowds and milder weather, you won’t have to stand out in long lines for hours on end when it’s scorching outside. The added bonus is that you can usually still see all of the Christmas decorations in Disney World during this time!

Check the Weather: Another important factor to consider when trying to decide When Are the Best Times to Go To Disney World is the weather. The Orlando area is notorious for having oppressive heat and humidity during the summer months.

If you don’t mind a little heat, consider visiting Disney World in the shoulder season of late April through early June or late August through early November. The weather will still be warm, but it won’t be quite as stifling as it is during the summer.

If you would rather avoid the crowds and enjoy milder weather, I recommend visiting during the fall or winter months instead. You’ll still be able to enjoy all of the fun activities that Disney World has to offer without the large crowds. And, you might even find some great deals on hotels!

Sometimes Disney World offers discounts for Disney+ subscribers, Annual Passholders, or Florida residents during the times of the year with lesser crowds which is a nice added bonus for not visiting during peak season.

When to Visit Disney World

You can have fun at Disney World at any time throughout the year. However, if you don’t want to deal with heat, long lines, potential downpours, and massive crowds, your best bet is to book your trip with loved ones during November-early March, while avoiding the major holidays during those months.

These are all fantastic times to visit the happiest place on earth with your loved ones.

If you’re not an early riser, you’ll want to become one while you’re visiting Walt Disney World.

Pack up your family and head out for fun during the first hours of operation for the least crowded time of day.

Take a break midday and visit again during the evenings for cooler temperatures and smaller crowds.

Before most people even think about heading to Disney World, you will already be able to enjoy touring the park like a pro.

With all these tips, you not only know when the best times to go to Disney World are, but you’re also ready for a great vacation! 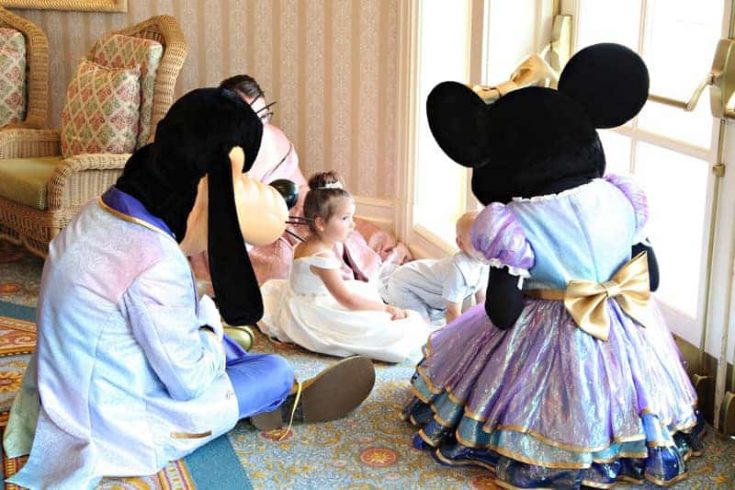 How and Where to Find Characters at Disney World 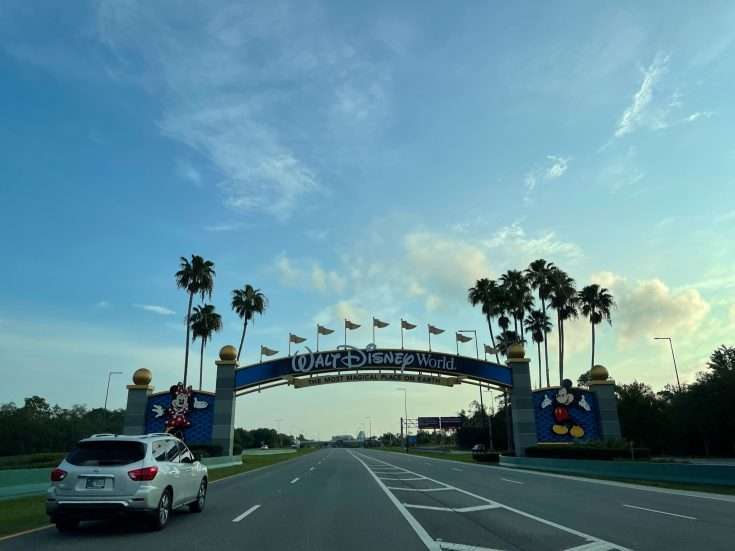 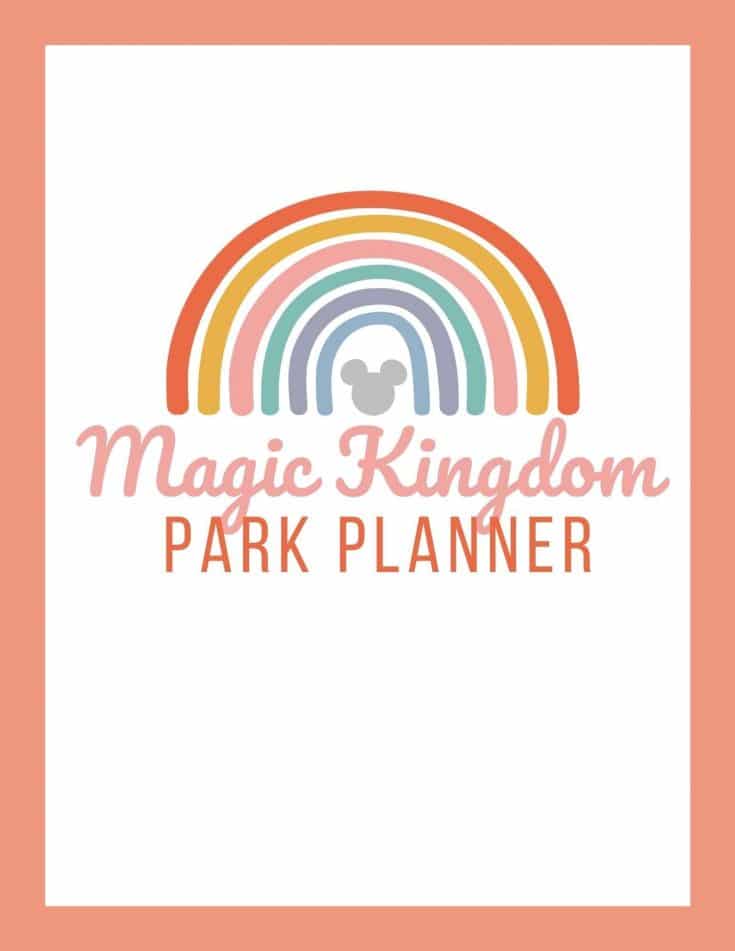 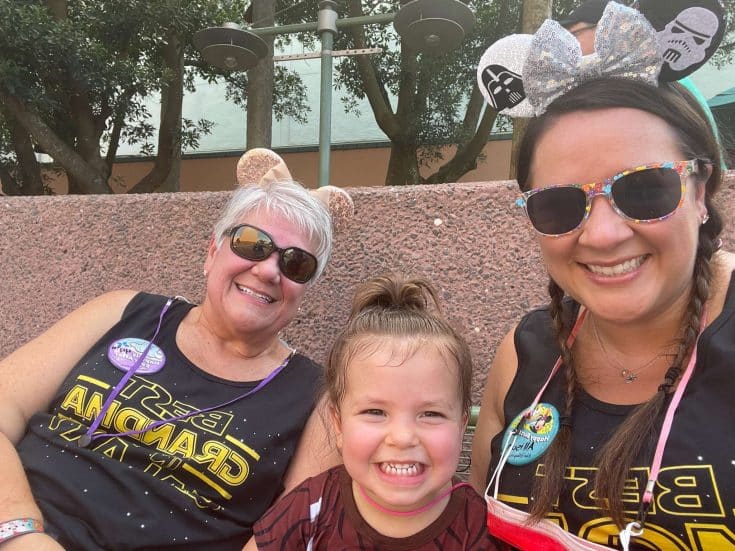 5 Things for Toddlers to Do at Hollywood Studios 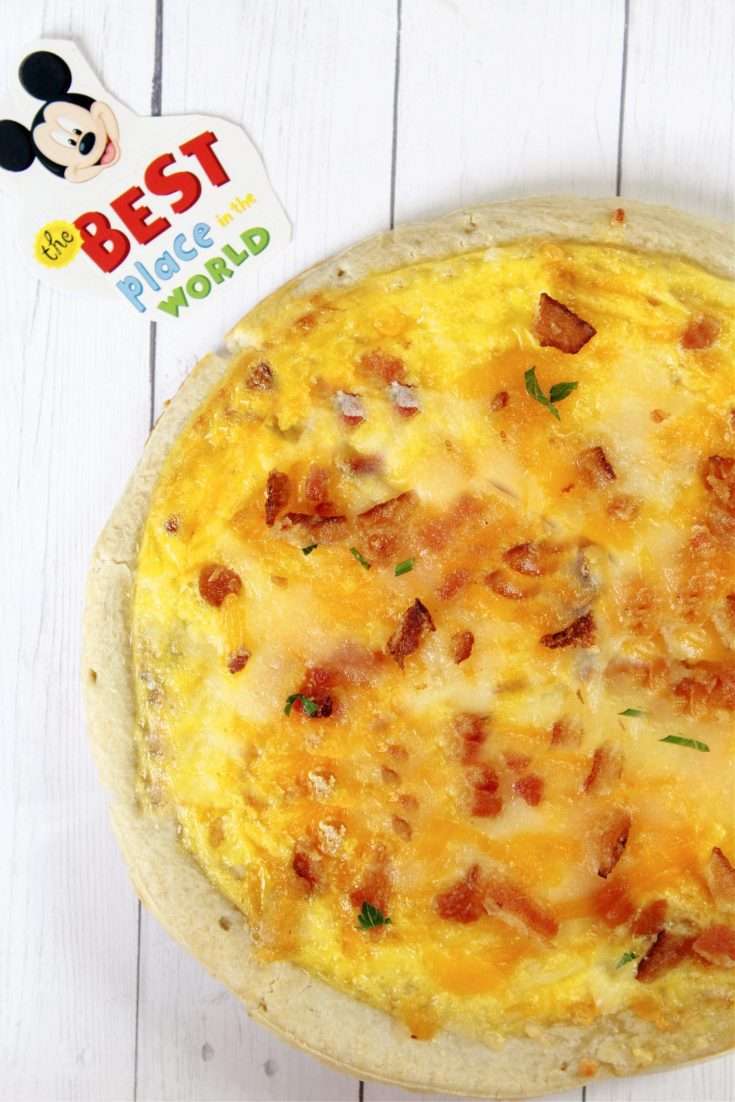 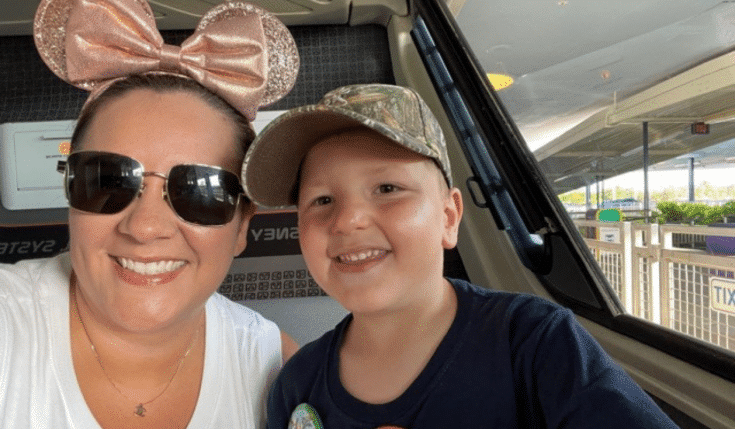